SC Chairman Discusses with US Envoy Relations Between the Two Countries 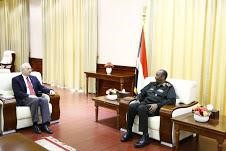 Khartoum, Nov.14(SUNA)-The Chairman of the Sovereign Council Lt. Gen. Abdul-FATTAH Al-Burhan met at the republican palace Thursday with US Envoy for Sudan Donald Booth. The meeting was attended by the US Charge d’Affaires, Brian Shukan and Foreign Minister Asmaa Mohamed Abdalla. The meeting debated over establishing fruitful relations between Sudan and the United States for supporting aspirations of Sudanese people for democratic transformation and success of the interim period. The American Envoy said in a press statement following the meeting that held a constructive and important meeting with the Chairman of the Transitional Sovereign Council tackled a host of issues of common interest including the ongoing peace talks between the government and the armed groups. Booth added that US would assist in pushing peace process in Sudan , pointing out that the meeting discussed a number of dossiers over which the two countries could cooperate for success of the transitional period, democratic transformation , writing the constitution and holding elections at the end of the transitional period. The American Envoy underscored his country’s desire to work with government of Sudan, saying he held a series of meetings with a number of executive officials in this connection and that his country would work with Sudan’s international partners to assist people of Sudan during the interim period. ab