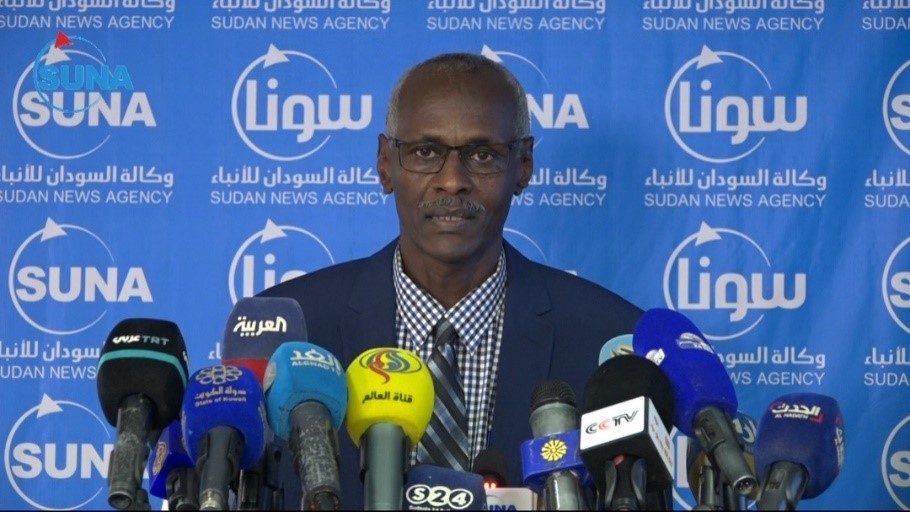 Khartoum, Sep. 8 (SUNA) - The Minister of Irrigation and Water Resources, Professor Yasser Abbas has expected the gradual decrease in the level of flooding, noting to the levels of the Nile recorded today 17.65 cm compared to 17.67 cm yesterday, while in Khartoum tomorrow it will decrease to 17, 61 cm, as a result of the gradual decrease in the water level in the Sen-nar and Rossires dams. The minister explained in a press conference held this evening at the SUNA’s that the heavy rains on the Ethiopian plateau are the main cause of floods, expecting that no floods will occur in Sudan after the completion of the construction of the Ethiopian Renaissance Dam, which will regulate the river flow. He pointed to the break of the flood severity this year by storing water in Al Rossires and Meroe dams, which had a great impact on alleviating the disaster. The Irrigation Minister has affirmed the safety of dams and reservoirs in Sudan, denying the rumor that there is a crack in the Jabal Awlia Dam, saying that it is a rumor with a purpose to create confusion and fear, adding that all dams in the country work with high efficiency taking into account the technical foundations for the operation of dams in relation to its safety, and the measuring of the concentration of silt in the water, indicating that flood and dams management works with high efficiency. He attributed the floods occurred in Tokar and Darfur to the fall of heavy rains, explaining that the rise of the Nile levels in Khartoum is caused by the urban expansion in the Nile Street, which led to the narrowing of the river course and the high level of water in the Nile, noting that the floods drowned the areas of Soba and Al- Masudia is caused by the narrowing of the river course in Khartoum. He asserted the ministry's responsibility of monitoring the Nile levels, the early warning, and do not interfere in the planning processes, pointing to the ministry's plan through which it can issue forecasts for 6 days before the occurrence of the floods instead of three days now. He stressed that the National Committee for Floods meets daily to monitor the rains in the Ethiopian plateau. The minister has reviewed a report on the level of floods in Sudan due to the flooding of the Nile and valleys, noting that 99% of the Nile’s flooding results from rain in the Ethiopian plat-eau, pointing to the level of floods in the areas of Wad Al-Eis in Sinja, Atbara and Shendi in the Nile and Khartoum and comparing it to the general flood of 1988 , saying: "Fortunately, the excess water was stored in the Sudanese dams, which led to averting a greater disaster." ta

Kabbashi Receives Director of Land Department and Discuss Issue of Flood-Affected Villages Khartoum, Sept. 16 (SUNA) – Member of the Transitional So... Read More
10 views
Attorney General: investigation on a number of cases completed and referred to courts
On 17 September 2020