The diplomatic relations between Sudan and Germany Grew up after Sudan gained independence in 1956, West Germany was fourth largest power recognized the independence of Sudan. Bilateral relations between the two countries affected by a number of political factors most important German position biased for Israel in its conflict with the Arabs, then the German position of the overall political developments in Sudan since 1989, which was characterized by conservative and attached to the USA policy in the general trend. However, Germany has played a positive role supporting access to the Comprehensive Peace Agreement, which was one of the witnesses. Like the signing of the Comprehensive Peace Agreement and the implementation of its provisions to move the input stagnation German - Sudanese relations where in 2009 and subsequent years start a number of mutual visits between senior officials in both countries.The federal government has endeavored to contribute to the solution of various conflicts in Sudan. The goal is a peaceful, secure and sustainable development throughout the country.
Germany supports the comprehensive peace agreement between North and South Sudan in the framework of the European Union and the United Nations financially and politically. Germany is an important contributor to the joint peace mission of the United Nations and the African Union UNAMID in Darfur and sent police and soldiers to the UN peacekeeping mission. Germany is also supporting the mission of training and equipment for African troop contingents. In Darfur, Germany is one of the major donors of humanitarian aid to approx. 2.7 mil. internally displaced persons. 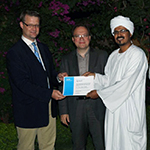 Cooperation in the field of culture and education is well developed. German culture and science have an excellent reputation in Sudan. Many Sudanese have studied or worked in Germany and keep in Khartoum an active network of Germany at interested upright. The Goethe-Institut in Khartoum has been making its reopening, 2008 in the program as in the language work a central pillar of cultural relations with Sudan is. Currently, the building of the Goethe-Institut is being renovated and expanded. With its cultural program (theater workshops, concerts, debates, etc.) and operated in-house café serves as a meeting point for the emerging Sudanese intellectual elite who visited the neighboring university institutions. Language courses at the Goethe-Institut enjoy great popularity. The German Academic Exchange Service (DAAD) is represented by an editor (German language) in Khartoum. This is responsible for the award of scholarships for study and research in Germany and for student counseling. Since 1990, German is offered as a foreign language at Sudanese universities. Currently, nearly 100 students in B. A. and BA Honours program enrolled at the University of Khartoum. The Alzaiem Alazhari University and the Sudan University of Science and Technology have a section for "German as a foreign language at Sudanese schools are so far not an offer to learn the German language.
In Science, there are a number of cooperation programs Sudanese and German educational institutions with exchange of students, graduate students, researchers and academics. These include the cooperation of the Ahfad Women's University Omdurman and the Humboldt-University of Berlin and the Technical University of Berlin (women's studies, development policy) and contacts between the Gezira University and the Humboldt University (agriculture, archeology) as well as a number of other Universities. In range of cultural preservation there is a close cooperation between the Sudanese Antiquities Service and various German archaeological institutions. Employees of the Humboldt University of Berlin, University of Cologne, the Egyptian Museum in Berlin and the German Archaeological Institute regularly carry out restoration and conservation work on ancient sites in Naga, Mussawarrat it Sufra and Gala Abu Ahmed through. Exhibits found there to be spent on a regular basis as loans to Germany. In 2012, Germany has supported this work with about half a million euros.

Economic relations between Germany and Sudan are characterized by high esteem German supplies and services; the volume is low. The major projects such as the expansion of the Sudanese telecommunications sector and in power plant construction and transport sectors have aroused the interest of German companies, in particular, participate with engineering services on behalf of the Sudanese government. Representatives of DIHK, AHK or correspondents GTAI does not exist in Sudan. The foreign trade with Sudan moves at a low level. Exports fell in 2012 to 118.7 million euros (2011: 312,630,000 €), while imports rose to 18.7 million euros (2011: € 13 mil.). Traditional Sudan's main exports to Germany are cotton, gum arabic as well as small amounts of sesame seeds, nuts and Leder. The Sudanese imports from Germany mainly include machinery and equipment, as well as finished products, chemicals and foodstuffs.