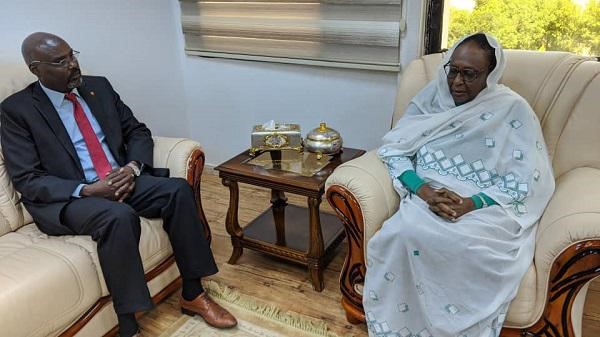 Khartoum, Oct. 14 (SUNA) – The Minister of Foreign Affairs, Asma Mohamed Abdalla, Monday received the Ambassador of Chad to Sudan, Salih Hegaira, on the occasion of the expiry his assignment to Sudan and thanked him for his efforts to consolidate the relations between the two countries.  Asma has praised the firm ties between Sudan and Chad and the role of Chad in realizing peace in Darfur and the participation of the President of Chad in the signing on the constitutional documents. She expressed the aspiration of the Prime Minister, Dr. Abdalla Hamdok, to visit Chad shortly. She also appreciated the experiment of the joint forces in protecting borders of two countries from all kinds of transborder crimes and transferring the joint border into one for the exchange of benefits, affirming the importance of reactivating the cooperation mechanisms in two countries. The Ambassador of Chad thanked the government of Sudan and the Minister of the Foreign Affairs Minister for their support to him during his office term in Sudan, stressing the importance of reactivating and strengthening further the economic cooperation in coming period, especially with regard to work of the joint committees, the free zone, the railway project that will connect Port-Sudan with Ndjamena. MH/MO