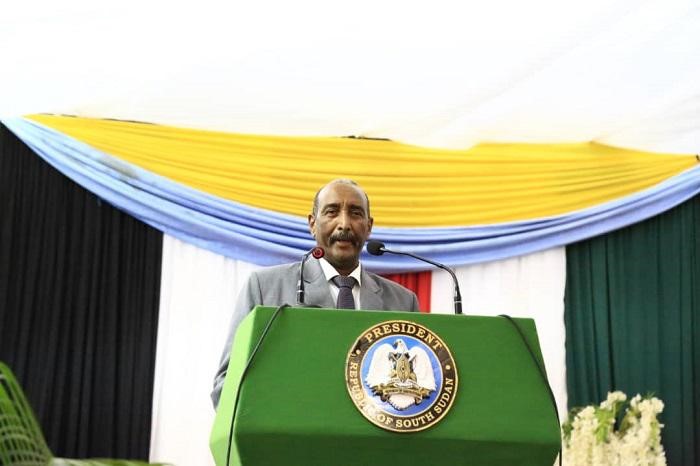 Juba, Oct. 14 (SUNA) – Chairman of the Transitional Sovereignty Council, Lt. Gen. Abdul-Fattah Al-Burhan, has stressed the state's commitment to achieving a comprehensive peace in Sudan leads to a democratic rule that meets the aspirations of the Sudanese people. Addressing Monday evening the opening sitting of the peace negotiations at Al-Hurriya Hall in Juba, the capital of South Sudan State, Lt. Gen. Al-Burhan pointed out that the change that took place in Sudan after the December revolution has opened a new horizon for peace with which the peace negotiations became based on partnership, stating that the leaders of the armed struggle are partners in the change that took place in the country. He affirmed the state keenness to achieve solutions for all Sudan problems in a manner that satisfy the people of Sudan and the brothers in the armed struggle. He praised the initiative of President Salva Kiir and assured his confidence in Juba forum to embrace the peace process.Al-Burhan reiterated his keenness that the Juba Platform will succeed to reach a solution that puts an end to the war by addressing the root causes of the problem.  He affirmed the necessity of establishing a regional grouping that is concerned with peace and security of the region. He saluted at the beginning of his speech President Salva Kiir, whom he described as the elder brother, for his initiative, and congratulated the Ethiopian Prime Minister Abiy Ahmed, on his winning to the Nobel Peace Prize. In his address at the opening sitting, President Salva Kiir said that their confidence on the new leadership in Sudan has encouraged them to organize the current peace negotiation platform, thanking the President of the Sovereignty Council and his deputy, General Mohamed Hamdan Doglo and the Prime Minister Dr. Abdalla Hamdok. He called on the negotiating parties to engage with confidence in the negotiations for the inte-rest of the Sudanese people and the region. The opening sitting was also addressed by the head of the Revolutionary Front, Dr. Al-Hadi Idris, who asserted the front’s commitment to reach a comprehensive peace agreement, stating that the change that happened in Sudan, with contribution of the armed struggle, has cre-ated a new reality to opening a new chapter for surpassing the shortcomings of the past. Chairman of the People’s Movement – North Sector, Abdul-Aziz Al-Hillu, announced in his address at the opening sitting of the negotiations the readiness of his movement to achieve a peace agreement that address the root causes of the problem. The opening sitting was also addressed by the President of Uganda, Yoweri Museveni, the Ethiopian Prime Minister, Abiy Ahmed, and the Egyptian Prime Minister, Dr. Mustafa Mad-bouli, who affirmed their countries’ support to the peace process in Sudan. MO