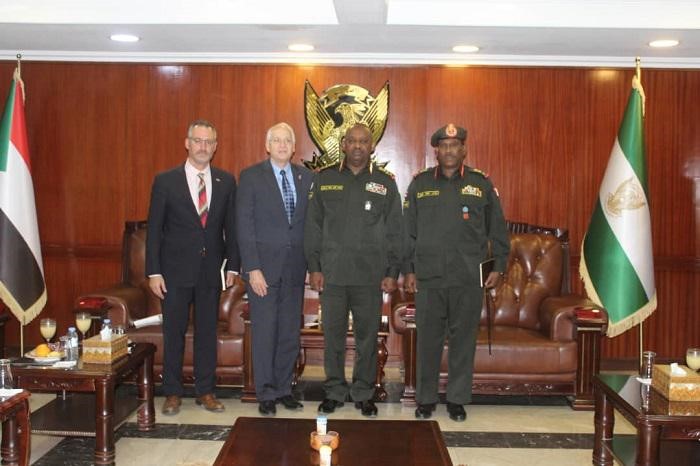 Khartoum, Nov. 13 (SUNA) – The Minister of Defence, Lt. Gen. Jamal-Eddin Omer Mohamed, Wednesday received the US envoy to Sudan, Donald Booth, in presence of the Charge d'Affaires and the Military Attaché at the American Embassy. The Minister of Defence presented a briefing on the transition that took place in Sudan until the formation of the transitional government, which is currently working with the help of friends and the State of South Sudan to achieve peace and to address the economic problems in the country, especially the issues of the displaced persons at the war zones, as a priority for entery of humanitarian assistance to their camps. He called on the United States to support peace, remove the name of Sudan from the list of countries sponsoring terrorism and to provide assistance to the Sudanese people to get out of their economic crises. The US envoy said that the relations between the two countries shall be based on transparency and that efforts will be exerted at all axes for restoration of the bilateral relations and to extend support to the Sudanese people who were displaced by war, adding that there are efforts by the US to boost peace in Sudan in technical matters and to urge movements to reach peace. He pointed to understandings and talks that would make a breakthrough in the bilateral relations for the benefit of the Sudanese people. MH/MO